Design a site like this with WordPress.com
Get started
Skip to content
Sabrina @ Notes From a Paper Plane Nomad Book Reviews, Sci-fi 24th Sep 2020 4 Minutes

“We are aware. we are conscious. And we are made from the same stuff as the heavens… We are the universe watching itself, watching and learning.”

During a routine survey mission on an uncolonized planet, Kira finds an alien relic. Her initial elation turns to terror when the ancient dust around her begins to move.

As war erupts among the stars, Kira is launched into a galaxy-spanning odyssey of discovery and transformation. First contact isn’t at all what she imagined, and events push her to the very limits of what it means to be human.

While Kira faces her own horrors, Earth and its colonies stand upon the brink of annihilation. Kira may be humanity’s greatest and final hope…

This was a beast of a space opera with a riveting plotline, rollercoaster plot twists, a ragtag found family, moments of insightful philosophical reflection and incredibly detailed world-building.

‘TSIASOS’ revs up with an absolutely riveting beginning. This book was a lot more gory/horror-thriller at times (alien invasion!!!!) than I’d expected, but it meant I was 100% hooked.

This gif kept going through my mind in the first few chapters!

I liked that Kira seems like a very regular woman caught up in a sudden interstellar war – her reactions and decisions were all very understandable and it was easy to relate to her. The other characters in the ‘found family’ are great too – my favourite was the utterly hilarious ‘Wallfish’ ship mind (aka super advanced spaceship AI) Gregorovich!

I was so invested in Gregorovich’s story not just because he made me laugh out loud so many times, but also because of how protective he is of his ship crew (borne out of a very tragic backstory).

I also liked that even though the crew of the Wallfish are somewhat morally gray, they are all INCREDIBLY brave, selfless, loyal folk. Their courage in the face of galactic catastrophe and impossible odds was both moving and inspiring.

“Let daring be our shield and righteous fury be our sword, and may our enemies flee at the sight of those who defend the defenseless, and may we stand unbowed and unbroken in the face of evil. Today is the Day of Wrath, and we are the instruments of our species’ retribution. Deo duce, ferro comitante. Amen.”

Just sticking a BTS gif in here because I can. (I am obsessed.) Also one of the characters is Korean, therefore a BTS gif is…relevant! Definitely relevant!

There was also a welcome diversity in ethnicities among the crew as well as a sapphic couple. The slow-burn romance was also quite sweet, a side thread of the main plot. I also appreciated the awareness of mental health’s importance and the note about how neurodiversity should be more accepted among humankind, as neurodivergent minds can be as capable (if not more so) than neurotypical ones.

“[S]hip minds get graded differently than you or I. Their ‘normal’ is broader than ours.”

I was also pleasantly surprised that ‘TSIASOS’ didn’t shy away from talking about bodily issues impacting Kira, like menstruation or pregnancy.

The plot twists in this were Level Up™ to the max. They rocket along, with a series of catastrophes avalanching at breakneck speed. Honestly, I felt breathless sometimes from the amount of rapid-fire action! 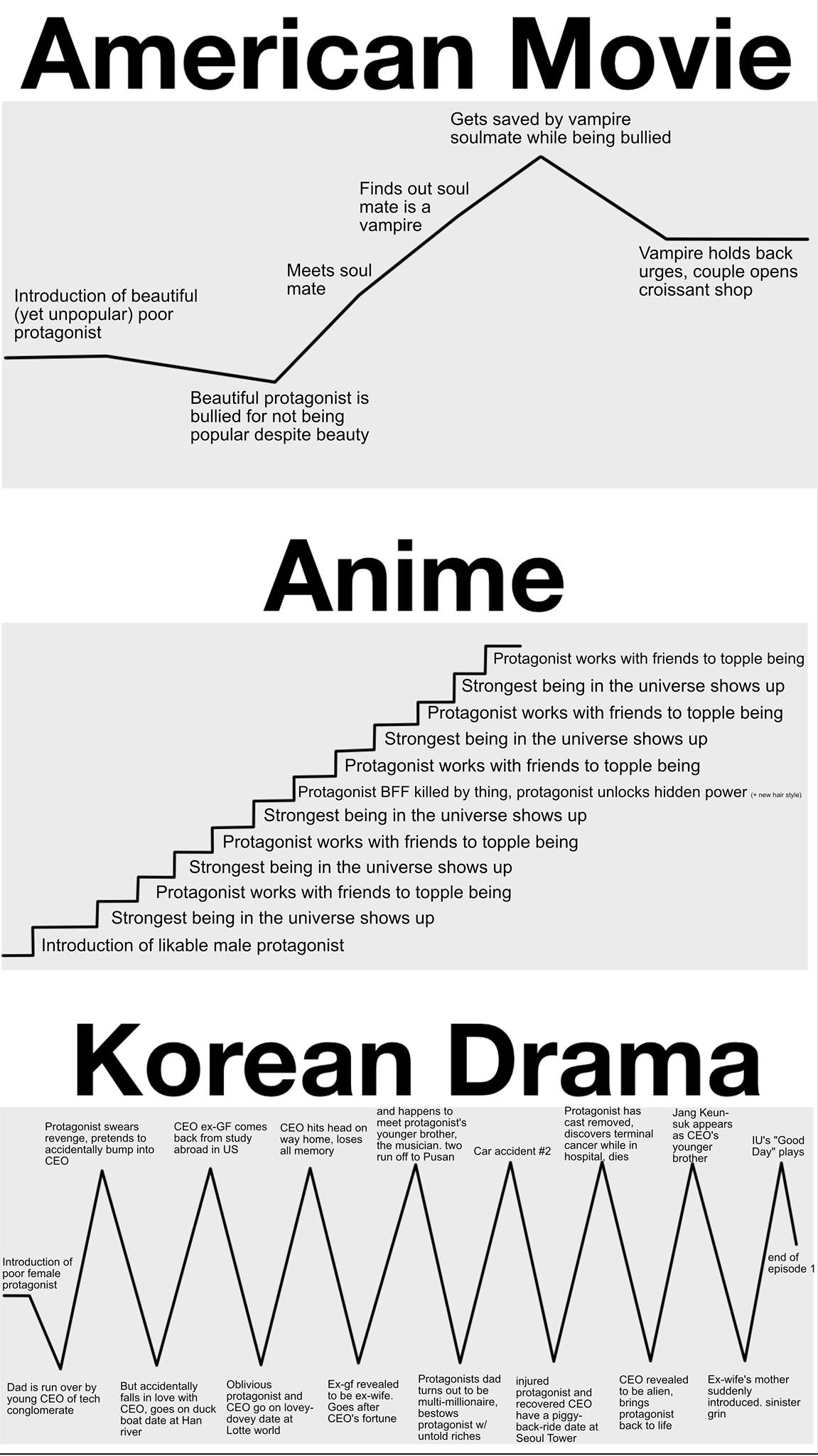 (Image by @/Dogen on Twitter) That line on the K-drama graph is the one that reminds me of ‘TSIASOS’!

Despite prominently featuring human-alien warfare, ‘TSIASOS’ felt more complex than an us/them mentality – humans were just as capable of mass murder and wanton violence as the Wranaui (aka the ‘Jellies’) or Corrupted (aka the ‘nightmares’). Hate born out of fear and anger.

Some of Kira’s dream sequences were a little hard to understand – though this could have been purposeful – and the POVs between Kira and the alien ‘Soft Blade’ were foggy at times. Occasionally Paolini goes a little overboard with the sci-fi jargon and detail. While it shows the depth of research he’s done, sometimes I struggled to get through all the complexities of ship machinery and space physics. I just ended up frustrated and felt pulled out of the story – personally, I’d rather know more about Kira’s backstory than the precise mechanics of this fictional spaceship.

I have the same comment with the Appendix, but at least that’s not within the story itself. I ended up skipping most of the Appendix section because I was just not processing the content, but if theoretical physics is your jam then you might really enjoy that part!

All that being said, there were some sci-fi details that were incredibly cool, like flash traces. The problem is just when the detail starts to overwhelm the story. Thankfully, that happens only rarely!

For such a huge book to not drag was truly impressive, and the ending was haunting – will there be a sequel? Who knows? Maybe one day the sleeper in a sea of stars shall awake and we will have our answer.

“See you by the light of a strange star, Captain.”

Thank you to NetGalley and Pan MacMillan for the eARC for an honest review!

Thanks for reading! Have you read ‘To Sleep in a Sea of Stars’ or is it on your TBR? Have you read Paolini’s ‘Eragon’ books? Let me know any thoughts below!

6 thoughts on “Review: ‘To Sleep in a Sea of Stars’ by Christopher Paolini”